Foster care is a truly family affair for Marianne Langes.

Growing up, the 64-year-old shared her home with four siblings and three much-loved foster children, whom her parents later adopted.

Marianne is now following in her parents’ footsteps, as a Specialist Short Term Reunification Carer at Centacare.

For the past three years, she has played a pivotal role in a care team that has wrapped around a brother and sister, and their birth family.

The primary aim has been to see the children return home. 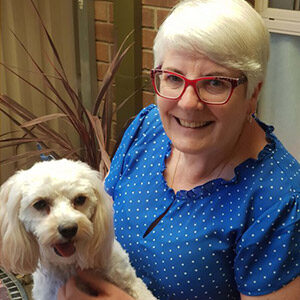 Marianne has done whatever she can to nurture the relationship between parent and child, and respond to the children’s often complex needs.

“I’m a single carer who’s never had children so it’s been a steep learning curve, but they’ve changed my life,’’ she says.

“They have brought so much laughter and love into the house. There is never a dull moment. Every day they give me some sort of surprise, be it big or small. It’s just a joy.’’

The pull of familial ties is close to home for Marianne who watched her brother search for his identity in his early twenties.

“I just saw in him that real need to be reconnected to birth family and I think that’s why I chose reunification,’’ Marianne says.

Specialist Short Term Reunification Carers support and encourage family connection and contact for children in their care, and help them to frame meaning about their experiences.

In recognition of the outstanding care Marianne has provided, she was recently invited by the Department for Child Protection to a two-day Adelaide workshop with therapist and international speaker, Bonnie Badenoch.

Bonnie’s focus is on helping trauma survivors and individuals with significant attachment challenges to reshape their neural landscape to support a life of meaning and resilience.

Children in care often face complex challenges due to family complexities and part of Marianne’s role is to help children make sense of events.

“I’ve had to have a flexible brain in trying to sort out what to do with some of the children’s issues,’’ Marianne says.

“The workshop helped me to think how I react to the children and it affirmed some of the things I have done with them and left me with two impact statements – I see you and I am here – and the other is to hold the brain with compassion.

“With the children, I’ve learnt the importance of being present; to just be with them, and that I don’t always need words and to jump on a problem.’’

Marianne is grateful for the support and training she has received at Centacare and highlights the fortnightly home visits made by Foster Care Support Workers.

“That has been really great – the time given to you to listen to you,’’ she says.

“I know it’s about the children but a lot of it is the support of you which makes a real difference.

“I’ve no regrets with anything I’ve done in my life, but this I think has fulfilled me the most and given me more rewards than what I’ve given to the children.’’